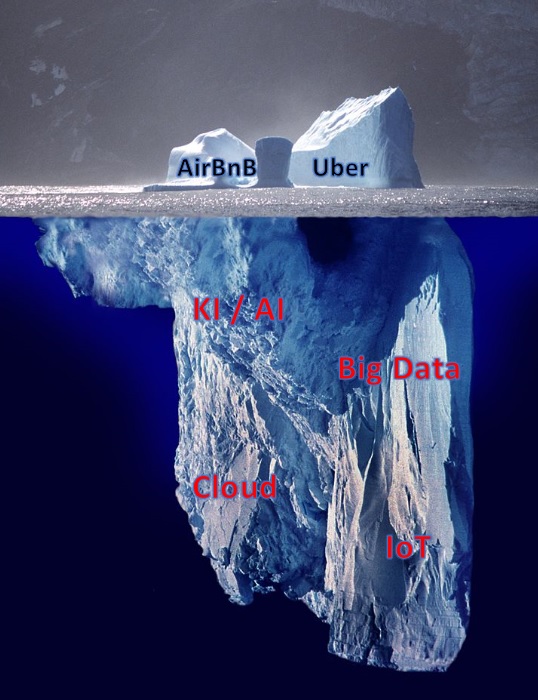 Today I stumbled across a tweet by Christian Müller which I found very exciting:

Executive, female, late 50s: You: “The whole digital world, where is there still value added?” Me: “What do you mean by added value?” You: “Well, produce something that can be touched.” – That, too, is a subjective reality in times of digitalization.

Does digitalization bring added value?
I can understand the thoughts in the first step: The biggest “winners” of digitization to date are AirBnB or Uber, for example. However, it is precisely such companies that have taken existing business processes and generated added value for the customer with smart applications. The process itself is the same, but exactly these new market participants are participating and taking margins.

In my opinion, however, these success stories are only the tip of the iceberg and do not symbolize the actual upheavals associated with digitization:

Digitisation is accompanied by a number of new technologies which not only affect the end customer but also enter production. Here are a few examples

IoT: Internet of Things: This is about networking all kinds of things. This includes not only everyday objects, but also machines and shelves. Logistics can thus be optimized considerably. In production, maintenance can be improved.

Big Data and AI: Networked with the point before, a lot of data can be collected, but also analyzed. Techniques such as neurological networks help to process the data and draw conclusions from it.

3D Printing: 3D printing can also be mentioned in the context of digitization. It still has the charm of a gimmick for nerds. However, the technology is developing rapidly. There are many conceivable areas of application in production, up to “Just in Time Printing”, i.e. the time-accurate production of components. This technology has so much potential that production could again become more attractive in high-price wage locations such as Germany.

What is reflected in the tweet is the perception. The best-known companies do not produce anything, but only use familiar business processes. However, these best-known examples are not representative of what digitization means for companies. There are also many possibilities in production that are not always so well known.

It is highly recommended for every company to deal with digitization: So not just apps, but: Where can we use new technologies and how can we use it?